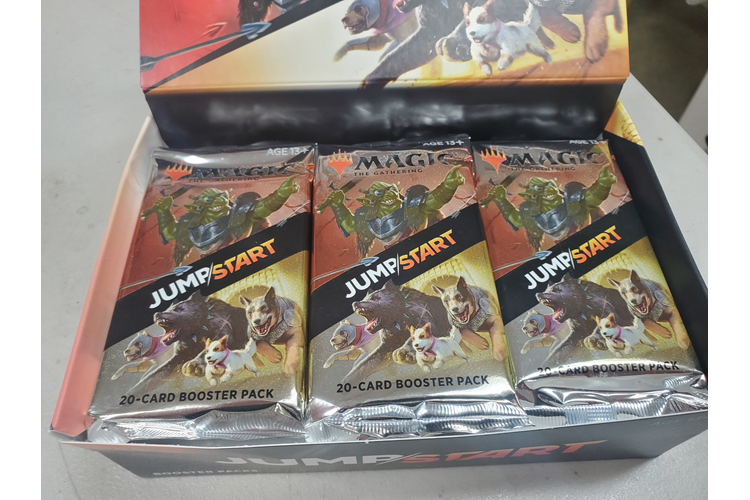 Posted Jul 18,2020
Ahoy-hoy Friends!
Issue #2 coming at you live on Friday Night! Paula has a sweet video and some shop news. I've got a few reviews and uh, well, thats about it. Why do I keep writing intos with nothing to say?
See You Round The Shop--Ed
... ... ... I almost forgot, We've got MTG Jumpstart packs! Limited quantity though, hurry while supplies last!

Hi, Fans! I created that video I talked about last week. You can find it here on Youtube: https://www.youtube.com/watch?v=03Sxct6nfG4
It goes over how to log in to your account and pay for your asides. I think my next video will be on how to place pre-orders for comics. I've got a few other topics in mind, but if there's anything specific you want to know about, let me know!
This last week was the start of "Free Comic Book Summer." I have to let you all know that we are not participating. It's just not safe to have groups of people coming into the shop looking for free comics. I haven't really said anything about it because I was worried that might still cause people to come in. We also won't be doing a Treasure Your Chest fundraiser this year either. Even if things were miraculously better by October, I haven't been able to make any plans. My planning usually starts in February or March. It takes a lot of time to create such a fun event! Sorry to say 2020 is the year of cancelations.
Stay safe, wear your mask, and wash your hands!
=Paula

"Engine Ward" Vault: A dry, water rationed planet ruled by celestials. Dinosaur monsters and ancient robot skulls. Deep space lore waiting to be collected like galactic breadcrumbs. This book has all of that craziness! 6 bath parties out of 10
"Sacred Six" Dynamite: Christopher Priest introduces our six main characters and the plot of the first arc using his recognizable "chapter" system of writing. For newcomers this may be confusing, but just like a Tarantino film the payoff is worth the wait. Jae Lee's art is equal parts angular and round, playing with idealized forms and suggested figures. If you've been reading Priest's Vampirella this is a must read and if not, this is a good place to get acquainted with her world. 7 chapter headings out of 10
"GIJOE: Snake Eyes: Dead Game" IDW: Whew, thats a long name but a quick and fun read! Action is paramount here with just enough narration to keep the pages turning. Everybody's favorite Joe, "Snake Eyes" is tasked with stopping some undead grave lord from conquering the world, luckily he brought some friends as back up. If you're looking for some fun action, where the lines drawn between good and evil are clearly marked, this is a great military fantasy to satiate that need. Also it doesn't hurt that Liefeld is in top form! 7 Yo Joes out of 10
"Empyre" Marvel: Have you been following the rumblings and rumors for months leading up to this universe changing event? No! That's ok, this book has a fantastic recap on the opening page, but I'll sum it up even easier for you...ahem... Two space empires at constant war team up under the leadership of Earth's very own Hulking (No relation to the Hulk), He's leading them to the moon for some galactic weeding, but those pesky Avengers don't want him doing any unlicensed landscaping! Now you're all caught up an ready to dig into Empyre or "HGTV Lunar Edition" But seriously, this is the epitome of Space Opera, there's love, politics, war, history, 4 or 5 species (I lost count). 5 warships out of 10