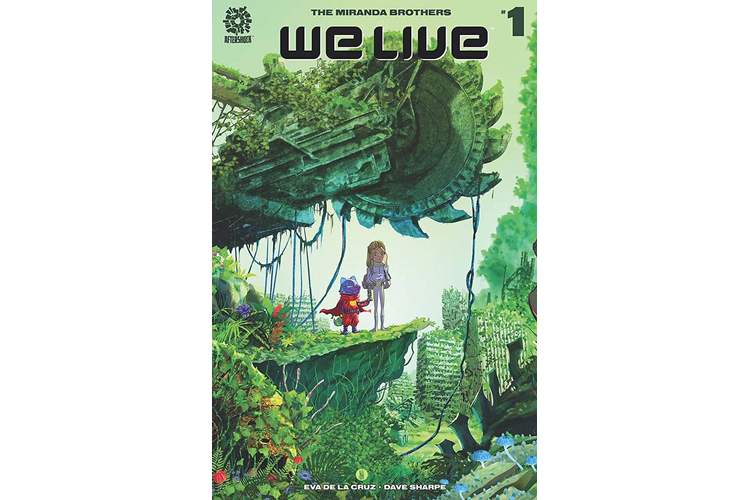 Posted Oct 17,2020
Ahoy-hoy Friends,
Ooops! I forgot to write an intro last week. In my defense, I wasn't working so I'm just glad I got something written and sent out. We've got three awesome books this week, and I'm sure one of them will pique your interest. We've got a new superhero team, a ronin's tale and a sci-fi extinction event. They're all so good too! I want to add all of them to my list! Really, I'm not just saying that. Anyway, I hope you find something you like here or on the shelves. We also have a game review from Paula!
See You Around The Shop--Ed

"Treasure Your Chest" A quick note about this years fundraiser. I'm sure you're aware that we had to cancel due to COVID concerns, but don't worry we're still raising funds thorugh your generous donations! We've already raised over $1000 to help fight breastcancer! You are all amazing! You can donate directly here: give.bcrf.org/tyc2020
"Commanders In Crisis" Image: Do you like superheros? Do you like crossovers? Do you like multiversal threats to reality? Then have I got the book for you! Steve Orlando is tackling a lot of difficult terrain. From introducing new heroes (that aren't just one to one analogues of the big two's heavy hitters) to villains stealing emotions, and every member of the Commanders is the last [Redacted] and first [Redacted] of their [Redacted]. Character design is top notch, they are all together unique and recognizable. If you've been wanting to read superheros but don't want to get bogged down in the giant sprawling history that is Marvel and DC, this is the book for you. 8 brain bags out of 10
"The Devil's Red Bride" Vault: This slow burn adventure set in feudal Japan follows the lone survivor of Clan Aragami as she is enlisted in a plan to regain honor. If you are a fan of Akira Kurosawa or Samurai Champloo I would highly recommend this book. It is dark and brutal without being grim, bloody without being gory. A rich backstory is slowly revealed; moments of intrigue and character depth are sprinkled throughout the narrative resulting in an issue that captured more of my attention the further I read. 7 cuts out of 10
"We Live" Aftershock: Set in the far future humanity is on the brink of extinction when a mysterious message promises refuge to 5000 children but the path to rescue may be too perilous to survive! This is really good! Everything about this book is wonderful: art, characterization, design, paneling, etc. Of particular note is the fold-out cover and soundtrack, Each page of the cover could be its own individual cover hinting at what lies within. It also expertly tells the story held within, something covers so rarely do these days. I know lots of books have soundtracks now, but I think having a QR code on the first and last page is the best way to go. It piqued my interest enough to grab my phone and listen, whereas other books just have a list in the back matter that I frankly never listen to. The tone is serious and somber, lightened by the children's imagination and playfulness. I better stop here, I feel like I am rambling, or I will be soon. 9 super transformers out of 10

"Tiny Towns" is a game for 1 to 6 players. Your goal is to build the most prosperous town. You have a semi-random assortment of buildings that you can build and you must collect resources to build the buildings. Each player takes turns calling out a resource for everyone to get. So you can pick resources that help you and/or pick resources that paint your opponents into a corner. The different buildings play off of each other for points. You have to be strategic about where to start placing your resources as well as where to finally build your building.
The solo variant is pretty fun too. The gameplay is mostly the same, the only difference is how resources are picked. You lay out 3 random resource cards and pick 1 of them to use. I definitely didn't score as well solo as a did against another player. It was still a good time and more enjoyable than I thought it would be!
I highly recommend it!
=Paula