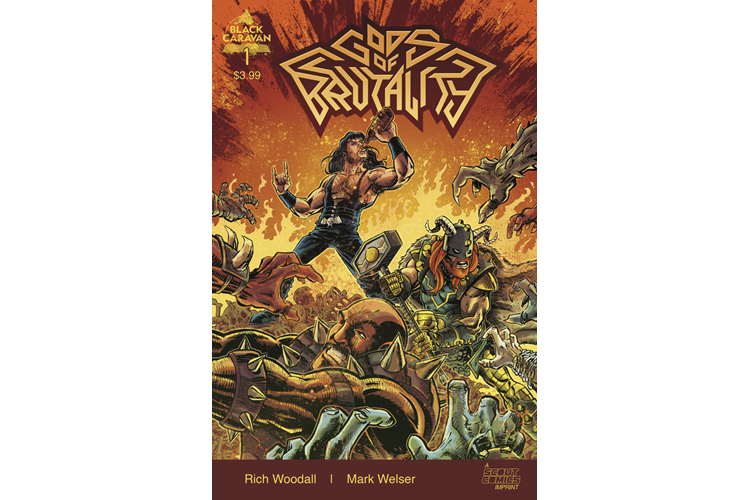 I'm trying something new this week! A second issue followup! Where I'll mention how the new issue has affected how I feel about the title in general and if I'll keep reading any further. Enjoy!
Comic Reviews
"Gods Of Brutality" Scout/Black Caravan: This book turns the metal brutality up to eleven! If you like "Murder Falcon" or "Doom" mixed with a Tenacious D album and a Thor/Hercules buddy cop team you can't go wrong! I realize I just threw a whole bunch of ingredients at you but if any of that sounds good, please check this book out. It is bloody and gory at times, also there's a smattering of adult humor and situations. So remember this is not for the kiddies, despite the maze and paper dolls in the back matter! 8  [Redacted]  puppets out of 10
"Moon Knight" DC: This is a solid jumping on point for new and lapsed readers alike. Using limited therapy sessions to deliver exposition regarding Moon Knight's shattered mental state and the previous narratives is clever and well balanced with the current situation and action scenes. Moon Knight is mercing Vampires and Rodents alike, who are harassing the citizens of his little corner of the city. He shows compassion for those turned against their will and unrelenting fury to those who deserve it. The cover art and most of the interior art is stellar, highly detailed and gorgeously colored. The colors in particular stand out when his cape flows seamlessly into a crescent moon or the moon shines in his shadow. Plus this issue does the work to set up two villains. I'm really hoping this gets to be a long and meaty run. 6 Fists of Khonshu out of 10
Honourable Mentions
"Beyond The Breach" Aftershock: This is a sweet story about a family, and how they are ripped apart by Interdimensional Beings bent on the destruction of all Earthly life! Plus make sure you check out our nauseating variant cover under the glass counter!
Blue And Gold" DC: This is a fun issue that see's Booster Gold and Blue Beetle trying to earn their way into the Justice League. The use of livestreaming txt conversations is boring at best and distracting at worst.
"Shazam!" DC: Spinning out of "Teen Titans Academy", Billy Batson's powers are on the fritz and Dr. Fate is worried it's connected to a chronalevent!
"Superman And The Authority" DC: It is exactly what it sounds like. Supes is losing his powers, the justice league has failed, and for some reason he's decided to work with Manchester Black and gang

Second Issue Followup
"Infinite Frontier" DC: I'll be honest I don't remember the rating I gave to the first issue but I wasn't impressed enough to add it to my pull list. Part of that is how stuffed my pull list already is! I went ahead and picked up number two on a whim and the whole multiversal mystery thing really clicked with me. I'm in. Seeing [Redacted] tear his shirt open and explode, an Omega sign appears on [Redacted] , plus President Superman and Thomas Wayne confront [Redacted]. How could I not want to see how this plays out! Plus I'm a sucker for secret crossovers and I swear I spotted Savage Dragon or was that an adult Lagoonboy? Someone with more expertise please let me know.
Your session will expire in:
00:00:00
Your session has timed out, please log back in to continue.