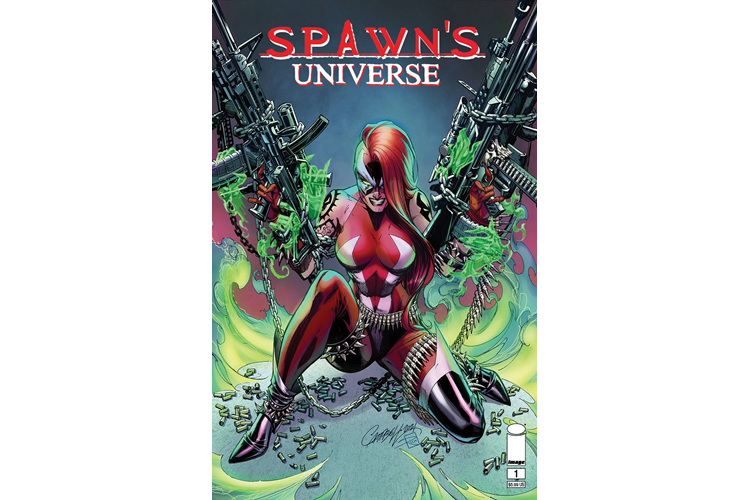 We've got exciting news this week!  We are entering and exciting under the "Open" sign, and the shop is basaically back to pre-pandemic operating procedures. We do however, offer hand sanitizer by the door and are keeping the sneeze guards in place. Most exciting of all...(Drumroll please) The Gameroom IS NOT OPEN! But it will be, eventually, sometime, in the future, but we don't know when. So please keep asking Aleah about it!

"Batman: Reptilian" DC/Black Label: Liam Sharp's art is stunning in detail and design. Batman is more menacing than ever. Demonic, wraithlike, tall and overpowering...with the long ears! Garth Ennis is setting up a deep mystery in Gotham's underworld, and actually shows Batman doing some detective work, not just whipping out a gadget to solve the problem! On the other hand I don't like much of Batman's tone and characterization. It isn't wrong, so much as it's almost perfect that the uncanny valley takes effect and I start to see the cracks in the performance. Also I know I praised the art and I stand by it's beauty and style. However, this may be one of the worst Joker depictions I've laid eyes on. Tis but a small nit pick, but worth noting. 8 Riddles on the floor out of 10

"Gamma Flight" Marvel: The writing falls flat, which is a shame considering this is by Al Ewing, who has been tearing it up on "Immortal Hulk" and his indie work. The story does start to pick up in the last few pages and ends with the return of [Redacted]. The book isn't helped any by the subpar art, especially when compared to Joe Bennet's work with these characters. This is a fine book for completionists but I would steer away if you're unfamiliar with what has been going on during Immortal Hulk. 6 guess what's in my pocket out of 10

"Checkmate" DC: I'm sure if you've been following the Leviathan story line that this will be an excellent addition. I, however, have not been and in general dislike Brian Michael Bendis's writing, so it's extra difficult to be objective.

"Good Luck" Boom Studios: The living embodiment of Good and Bad luck met and touched in Ohio and since then luck has been a fully quantifiable metric. This book is pretty slow, dealing with some esoteric ideas, and the line work is of the looser variety. The colors however are gorgeous! Especially the lemon yellow sunshine of the Good Luck God!

"Infinite Frontier" DC: Joshua Williamson is setting up a multiversal mystery by remixing familiar characters and plot points from across DC history. There's a crash landed [Redacted] found by Kansas farmers (It's not who you're expecting). A Black Lantern Ring Wielded by [Redacted] controlling former versions of himself. There are so many little parts that could be their own fully fleshed out story that I'm curious to see how they all weave together.

"Spawn Universe" Image: If you like Todd McFarlane and Spawn, chances are you're gonna dig this oversized one-shot. The main story and the three back ups are teasers setting up events and titles to come. For new readers, this may be a bit tough to get into outside of the artwork. There is some dense lore and recent history being mined throughout. On the other hand there is the appearance of two new characters! Making this an exciting issue to check out. The art is of course is gorgeous.