Department of the Divine 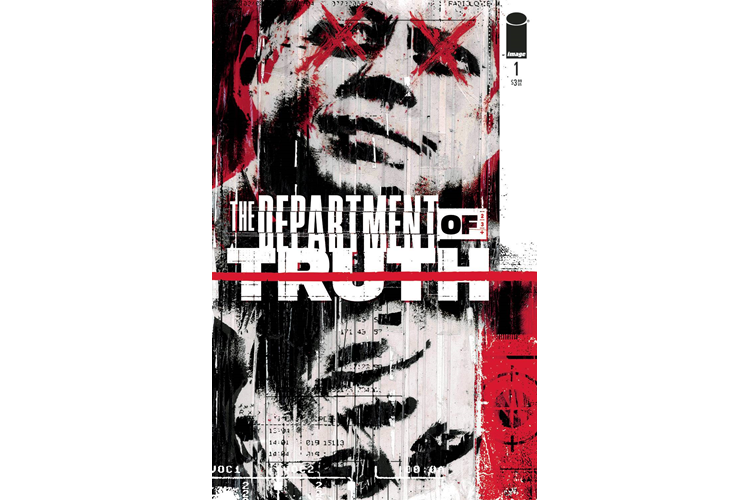 Ahoy-hoy Friends,
What a nice change in the weather this last week, too bad it can't last forever. Wish I cold have gotten to a few more titles, but life uh happens. Luckliy Aleah is here to pick up the slack with another great review and Paula has some exciting news regarding the "Treasure Your Chest Fundraiser" Also, if you notice a drop in grammar quality this week, that's also my fault. Usually I enlist my mom to proofread whatever I write but I never got my review out to her. Hopefully this is still readable!

"Department Of Truth" Image: What if I told you that truth and reality are malleable, that we as individuals and society at large literally create the facts that surround and inform us. If that is the case though, who polices the truth? Who keeps the reality from changing? Who keeps conspiracies as conspiracies? The answer, The Department Of Truth led by [Redacted]. The art is like a dream, a stream of consciousness collage, bringing together or maybe expertly emulating many differing styles and techniques to capture the fleeting and fluid nature of memories. This is juxtaposed by the grounded and straightforward writing which creates an atmosphere of unfolding tension. Also, each character has a distinct voice that informs their personality and current emotional states. 8 conspiracies out of 10

"The Wicked and the Divine" Image: Kinda feels like Game of Thrones where none of the characters are safe from death. Don’t get too attached. Gods are real, they come back every 90 years and humanity goes wild. These gods throw concerts, parties, and sometimes cult blood baths. There’s some weirdness going on with the gods though; alliances and rivalries and secret plots to destroy each other. Maybe a plot to wipeout humanity along the way?
Traits: Mythology, Cult, Supernatural, Crime, Messy Relationships
Rating: 3.5/5

Holy cow! The Magic Community at Fantasium met my challenge and donated $500 to BCRF so I matched it! We are so thankful to the Magic players for this generous constribution. Lets keep the giving train rolling and see if we can beat last years fundraisr! Comic readers and game players, you've got some catching up to do!
https://give.bcrf.org/tyc2020